Recently, I decided to put Facebook Audience Network ads in my app, You Doodle for iOS. Not knowing how well they would perform, I added some server side parameters to configure the order of my banner ads and popup ads. I know many ad frameworks offer mediation, but I’ve had bad experiences with it, so I rolled my own. I’ve used AdMob in the past, but it is my last choice now because the payout is so poor.

At any rate, my stats from Facebook Audience network are so far very favorable compared to iAd. Facebook Audience Network has a much better fill rate than iAd, and seems to perform better overall. My guess is that because Facebook knows you better than you know yourself (they are masters at harvesting user data), they can serve up highly relevant ads that are not only clicked on, but acted on. The cost per click of even the Facebook banner ads is great, and the popup ads pay amazingly well per click.

Sunday is only halfway done, so just multiply those numbers by two.

Has my iAd revenue dropped significantly after being moved to second fiddle? Amazingly, no! Here’s a graph of the same days.

*The last bar on the right still has 6 hours to go!*

iAd hasn’t suffered at all… 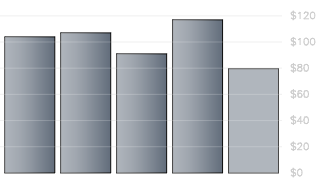 If you haven’t yet put Facebook Audience Network ads in your mobile app, do so now. They pay comparable to iAd, and have a way higher fill rate.

I’m starting to use FAN as well, have you noticed how low the number of “Impressions” is compared to “Filled”. In your screenshot it seems to be 20K filled, but only 4K impressions. My stats are similar so far. I understand that not all filled ads will be shown to the user, but compared to Admob it’s like <50% vs. Admob’s 80%. Any ideas?

Lately iAd has had major issues. I’m not sure if it’s my account or not so I have remove iAd. Facebook Audience Network is performing slightly better than AdMob, but not by much at 0.5 ECPM.

I have two questions. Do I have to wait the two weeks before I could add the ads to my app with the facebook audience network and is there a tutorial for swift?.

Approval time varies, so it might be less than two weeks. I only use objective c so I don’t know about swift. Sorry.