The Value of Your App Portfolio

jjxtraPosted on April 16, 2015 Posted in Uncategorized — No Comments ↓

I just recently learned about the game, “Five Nights at Freddy’s”. Upon searching through the top paid apps on iOS I was astonished to learn that THREE versions of this game were in the top 10 paid apps! The amount of money these games must be making their indie developer, Scott Cawthon, is likely in the tens of thousands of dollars per day, if not more.

I decided to see what Scott had in his app portfolio. I learned that for a long time he made Christian games and other games that did very poorly and had a negative return on investment. It took him well over a decade of making games before he created “Five Nights at Freddy’s” and struck gold. The game is very simple, yet very, very polished and well thought out. The simple game play and ambiance and feeling of getting “jump scared” really make the game remarkable.

I looked at Scott’s apps and based on how many reviews each are getting, came up with a very telling graph on revenue for all his apps: 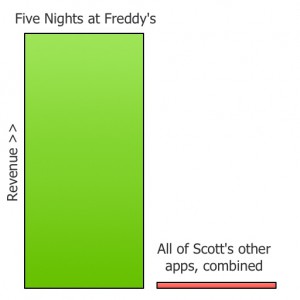 One game, or franchise, is making all the revenue for Scott’s company. I have a theory as to why this is:

It is very clear that Scott learned more and more over his career to the point where he could create a game like Five Nights at Freddy’s. It wasn’t his first game. It was likely closer to his 50th game.

Just watch this video on YouTube, it’s pretty telling. Notice the effects in the game, the static, the background noises, the graphics and voice quality, etc.
Skip to 16:00 to see the “jump scare”. 🙂

I recently read the book, “Zero to One” by Peter Thiel, that talks about “the value of your portfolio”. He is a venture capitalist. His portfolio consists of Facebook, another solid company, and lots of other companies that are failing or not returning what he put into them. With all the companies that he doesn’t get a return on, it doesn’t matter. Facebook was such a home run hit, that his investment firm is essentially set for life. Peter’s strategy when investing is to only invest in companies that have the POTENTIAL to return the entire value of his portfolio. He argues that playing it safe with a lot of mediocre / low risk investments MIGHT allow you to break even, but more likely will cause you to lose money. This makes a lot of sense to me.

As an indie app developer, you may be tempted to do your own pet games or apps, but this has the great potential to be a recipe for failure. Any app that you create must have the potential to reach millions of people in order to support you and your family.

What are the characteristics of apps that can return “the value of your portfolio”? Here are some attributes of apps that have a chance for great success:

– The app must appeal to a wide audience (weird apps, not useful apps, complicated apps or other “niche” apps are not likely to do this)
– The app must be mostly bug free and easy to use and polished
– The app must have a social mechanism to spread the word and drive downloads (downloads cause more downloads and increase app rank, especially on iOS)
– The app must have a way to generate revenue – especially for an indie developer this means a paid app or in-app purchases or ads
– The app must stand out from the crowd – 90% of apps are likely junk, so you are competing against the top 10%, make sure you do something unique or beat your competitors on price or reducing the number of ads in your app
– The app must be addictive – people either need to love using your app or need to love watching people use your app, this will add to people spreading the word and driving downloads, etc.

I think this touches on the key points about your app. When thinking about an app idea, make sure to check all of these points off first, otherwise I believe there is a high probability of failure for your app.