jjxtra Posted on January 8, 2012 Posted in Uncategorized No Comments 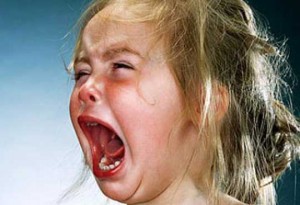 Game development is hard. It just is. As I develop games, I feel like this girl and want to just cry. The pain, agony, and frustration of it all makes me wonder if there is an easier way…

You see, my brother Jeff and I have been playing and making games since we were 7 years of age (in the 1980’s). It all started because our dad showed us a game on his Compaq computer of a guy walking around with a briefcase and eating floppy discs. It was a Pac-Man spin-off.

I started off writing games in BASIC. I’d sit in church for hours and write on a paper and pencil notepad the entire game, line numbers and all. I had a lot more patience back then… It was nice because I could go home and type up the game, fix any bugs, and play it. So what if each monster encounter was hand coded from scratch. So what if the game was a plate of spaghetti code worthy of an all-you-can-eat buffet. I was able to code for the PC and it was an exclusive relationship.

It’s all dorked up now. I blame the free market. Before you crucify me, let me explain. The free market is not evil. It creates competition, which drives innovation and progress. That being said, it also creates silos where companies have THEIR OWN proprietary system. Apple has their iPhone, Windows has their Windows Phone, Google has their Android. Then their is MAC, and PC, and web browsers, and Flash, and Silverlight, and XBOX, and the WII. It’s enough to make your head spin when deciding what platform to make a game on.

Oh that their could be one over-seeing master platform that everyone coded to and that it would not be C++. I could live with an evil empire if it were able to make this happen… Well almost.

Coding a Game Is Hard

My brother and I spent almost an entire Saturday (yesterday) trying to figure out how to port our XNA game, Math Asteroids, to the Android. We tried to use this thing called Mono for Android to convert our game, Math Asteroids, to the Android. After hours of fussing with it, we came to the conclusion that the tentacles of our XNA game were too deep and that getting this to work on Android would probably require a rewrite.

We like the idea of XNA. It allows coding for Windows Phone, XBOX, and Windows all in one shot. Once we got signed up with App Hub (Microsoft’s marketplace account), we were able to submit Math Asteroids for the XBOX and Windows Phone. App Hub has some issues though, but that’s another topic for another day…

The problem is this leaves out iPhone and Android, the leaders in market share. Mobile use is rising and not having our game work on this seems like a missed opportunity. I almost think I am going to have to learn C++. I swore on many graves I would never put myself in that position. But in order to code for all devices, it’s starting to actually look like the only viable option. I’m getting the chills (the bad kind of chills) just thinking about this…

I honestly don’t think coding a game in XNA is that hard, especially if you have a genius like my brother Jeff who is able to take all the complex crap and wrap it up in easy to use methods. We coded Math Asteroids in about a month and a half. I consider that a big victory. However, our next game is going to have to work on more than just Windows platforms.

Moving forward with game development, I just don’t know what we’ll try next. Jeff has successfully made 6 iPhone games all by himself (with some outsourced help). That’s impressive. But you’re a game developer. Making the games is one thing. We want millions of people to buy them and play them. How do we make that happen? That’s a good question I honestly don’t have an answer for yet. But I’m certainly going to be exploring it.

We’re going to have to solve how we develop for all platforms. And we certainly could use a graphic designer or someone to make the games look pretty. Me and Jeff doing the graphics is not going to cut it. A 2nd grader could do better than we can. Then there’s the whole issue of what kind of game do we want. Facebook and Google Plus are also showing reasonable success in the game market. Here’s a summary of what we have to figure out and choose from:

Jeff and I have full-time jobs and families. This means we’ve got to be very accurate with our decisions and make all our free time count. We’re serious about making all of this work. But there’s a truck-load of questions to answer and figure out. I’m not sure we’re going to be able to make it happen with just us two. But that’s what this website is for. To explore, educate, and hopefully bring together game developers to make all our lives a little easier, more rewarding, and dare I say profitable.

[…] getting the game done. It just takes a sheer amount of effort and focus to finish a game. Because mobile development is hard, I’d say the majority of people never actually complete their games. The second challenge is […]

[…] and have this kind of success? Why doesn’t everyone sell millions of copies of their game? Game development is hard. That’s one reason. But there is much more to it than that. There’s at least a tribe of […]