jjxtra Posted on June 21, 2014 Posted in Uncategorized No Comments 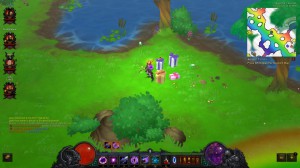 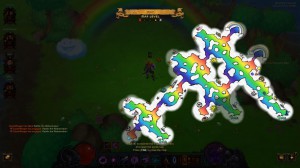 My first thought was “I bet my 5 year old daughter would love this!”. She likes to wear the headphones when I play Diablo 3. With a few tweeks, this level could be a full on kids game.

From Diablo 3 Wiki, here’s how you get to Wimshire:

Players must assemble the five ingredients and the Staff of Herding plan to enter the level.

Black Mushroom (db)– Found rarely in a room on Cathedral level one, in early Act One.
Leoric’s Shinbone (db)– Found rarely in the fireplace in Leoric’s Manor, in late Act One.
(Leoric’s Shinbone is *not* present or required in the Diablo 3 console.)
To farm for this select Quest number 9 “The Imprisoned Angel” in the Change Quest menu when you log in. Take the Waypoint to Leoric’s Manor. You will have two rooms to fight from the back of the manor to reach the room with the fireplace in.
Wirt’s Bell (db)– An Act II vendor (Squirt) sells it for 100,000 gold on her Potions and Dyes tab.
Liquid Rainbow (db)– Spawns in the Mysterious Cave in the Mysterious Chest in the Oasis, Act 2. Save Zaven the Alchemist and he will open the entrance to the cave. The chest is located on level one.
(Liquid Rainbow is *not* present or required in the Diablo 3 console.)
Gibbering Gemstone (db)– Random drop from Chiltara in the Caverns of Frost, Level 2, Act 3. It’s in the Fields of Slaughter. If you get Ice Caverns exit out try again. Chiltara is a Superunique with a low spawn chance.
Plan: Staff of Herding (db)– To teach the recipe to Haedrig. Drops randomly from Izual, Act 4.
– See more at: http://www.diablowiki.net/Whimsyshire#sthash.cPX5Vnrw.dpuf